where Volume 1 left off.

There is a New Year's beach party killing in the opening pages which leads to the discovery of a rabid wolf wandering the Mourne Mountains and leaving a trail of grizzly killings in its path.   And there is the missing body from the morgue that just seems to have resurrected itself and walked out.

The ongoing battle between the An Rua and the Noctrailis is enough but now the Southern Dun of An Rua wolves is at odds with the Northern Dun.

There is terror, grizzly murders, quests for power laced into the weave of characters from the lovely Cara-Marie, newspaper woman and her photographer Mark, and the doubting Thomas editor of the paper Kevin always getting in their way of their quest to show the world that the werewolf clan in Northern Ireland is the REAL thing.

Iain McLachlan was born in Scotland to a Scottish Father and an Irish mother and raised in Northern Ireland. He has been all over the world and loves to travel. He runs his own business teaching First Aid and spent nearly 30 years working pre-hospital.   His interests include Reading, Rugby, Ice Hockey, Biathlon and he is a qualified Sailing Skipper.  Iain is just as happy sailing as he is walking in the Mourne mountains.   This book, Volume 2 is the second in the ongoing series. 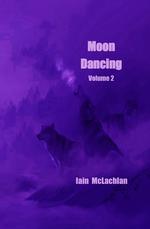