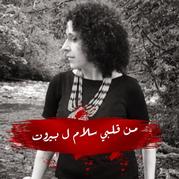 Lozan Yamolky was born in Baghdad, Iraq. She is the fifth of eleven children.  She is of Kurdish decent  Lozan left her homeland in 1994 and moved to Ankara Turkey as an asylum seeker.  She also worked with UNHCR (United Nations High Commissioner for Refugees), the Canadian Embassy and the Australian Embassy as an interpreter until her whole family migrated to Vancouver, BC, Canada in 1995.

Lozan  began to write poetry as early as preteen years but fear of being judged and ridiculed by peers & siblings caused her to stop writing and try to throw her poems away.   Her uncle Serwan Yamolky, a poet, musician, singer & songwriter inspired her to continue writing after he found her one day crying after some kids at school read aloud one of her poems and laughed. He listened to her read one poem she was about to throw away. He was pleased and asked her to never, ever destroy her poems anymore. He offered his house for a safe place to hide her poems.

She kept her poetry writing a secret and did still destroy many over the years. In the 2000s she started to secretly write and hide poetry because she wrote about her sadness, anxiety and depression. She felt ashamed if anyone knew of her inner struggle. Poetry was therapeutic for her.

In 2013 she discovered poetry group near where she lived in Maple Ridge purely by accident through Facebook; a group called Holy Wow Poets of Canada where she regularly attending, reciting and writing new poems.

Lozan is the mother of two boys from a previous marriage. She is happily married living in Vancouver and works as a freelance interpreter for both Kurdish & Arabic languages. Lozan thinks of herself as the embodiment of two worlds; a world that is silent from lack of empathy and a humanity that is suffering with no one to speak on their behalf. Lozan also embodies a truly out-of-this world childlike joy and pure love from the most trivial ordinary things bringing her joy and peace from within.