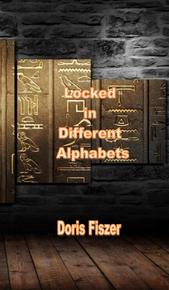 LOCKED IN DIFFERENT ALPHABETS is shortlisted for the  Archibald Lampman Award 2021. This collection of memoir poetry will appeal to readers who have contemplated their role in the family, cared for a difficult parent, faced the loss of a loved one, experienced a problematic relationship with a sibling or parent, and perhaps grew up in a home where one or both parents were war-time survivors.

In section one we are immediately drawn into a complex family dynamic of the author growing up with a troubled sibling, his battle with Lou Gehrig’s disease and the effects his death had on the family.

The second section deals with the author’s father and mother. Fiszer often uses dialogue with her father’s words describing his Nazi camp experiences during World War 11, and his deep love for her mother. Fiszer illustrates her complicated relationship with her father, after her mother’s death, through a series of poems that show his demanding and critical nature and his difficult transition from an independent lifestyle to a long-term care facility where he died from Parkinson’s disease at 89.

In the last section Fiszer describes her mother’s life when the Warsaw Uprising began, incorporating some entries from a journal her mother kept during that time when she was in several war camps. The strong love Fiszer and her mother shared for each other is revealed in a variety of poems, many based on dreams she had and continues to have of her mother after her death.

Locked in Different Alphabets will provide comfort and spiritual inspiration to anyone who has experienced loss and is navigating the complexities of being human.