A year ago, I completed the ambitious project of studying a page of Talmud a day, an endeavor which took 7.5 years to complete. As I made my way through this central text of Rabbinic Judaism which serves as the primary source of Jewish religious law (halakha), theology, and ethics, I found myself captivated by one person in particular. Each of his teachings was preceded by the tantalizing introduction “when Rav Dimi came.” I wondered who this Rav Dimi was that his arrival was such an event that it needed to be announced each time before his wisdom was shared. He seemed important, and yet, his was not a name with which I was familiar. In looking for biographical material others had compiled on him, all I could find was that Rav Dimi was a 4th century Jewish scholar and sage, and that there seemed to be more than one sage in Jewish history with the name Rav Dimi. Only one, however, had his teachings prefaced with “when Rav Dimi came.”

As I looked further into the mystery of who this sage might have been, I then discovered that Rav Dimi brought over 80 teachings from the centers of Jewish learning in Israel to the Jews living in Babylonian exile. While we have a record of these teachings preserved in the pages of the Talmud, none of them were accompanied by information about Rav Dimi’s biography or personality. Lunch with Rav Dimi, and the study that inspired it, is my attempt to get to know this remarkable teacher, and to do my small part to capture the life and legacy of Rav Dimi in poetry. For those who wish to delve into the source texts themselves, Talmud citations are presented in parentheses at the end of each poem inspired by a particular discussion in the Talmud. 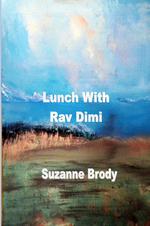