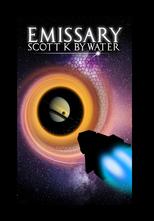 Ever since it was freed from the slavery of mindless instinct, humanity has been tantalised by the dazzling possibilities of space. Modern history is littered with the quest for the grandest secrets imaginable. But what if we found proof that everything around us was not as it seemed, that everything was contrived like a delicately prepared pie?

A black hole is headed toward Earth and will mean the end of mankind unless Earth can somehow change its trajectory.

Using its revolutionary Cygnus technology, Earth launches a massive nuclear strike, but fails to halt the terrible coming. A desperate planet counts down to Armageddon, ogling the twin horrors that loom in the sky like a second Sun.

Mitch Taylor and his crew sag under the weight of their crushing task, carrying the destiny of eight billion other residents of the planet. Beginning on farside Luna, the four-year journey starts from Moonbase II in the ancient post-maria crater, Mendeleev. After two years the unique star-kill propul-sion system carries the crew a full light-year from Sol, between Pluto and the twin suns of Alpha Centauri. But their mission to deflect Nemesis is sabotaged by frail silicon technology. The delivery vessel is swallowed by the flaring belly of Prox-ima Centauri, leaving parts of Rhys fused to the aluminised Kapton like burnt cheese.

Mitch, Jessy, Sean and Joshua, the final quartet, confront the meaning of failure with a paralysing clarity. Extinction, an end to the species, they knew what it meant. But pure luck deals them an impossible hand. They encounter an alien spacecraft, or rather it encounters them, sliding up to USPA’s best while they sleep on unaware.