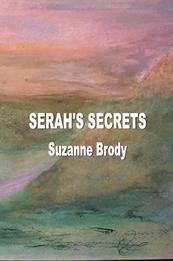 I can’t remember when I was first introduced to Serah, but ever since she was pointed out to me, I have been fascinated by her. In a text where men far outnumber the women, her name appears in two lists, set centuries apart, without any other information about who she was or what role she might have played in events. I’m not the first to think she must have led an extraordinary life. In the Medieval time period, multiple Sages recorded tales with Serah as the protagonist. I have done my best to be faithful to as many of these stories as possible while weaving my own narrative, even in cases where contradictory understandings were presented.

Around the time of the Enlightenment, in the 1800s, when rationalist thought was revered above supernatural and mystical explanations of the world, the stories of Serah sank into obscurity. While recent feminist scholarship has revived some interest in this fascinating woman, she is still unknown to the vast majority of people.

The same might also be said of Osnat (whose name also appears as Asnath). 500 years ago, Osnat was a wise scholar at a time when few females received much education. She has been called the world’s first female rabbi, though few today know of her and the stories of the miracles she is said to have performed.