What is history? It is certainly more than a static collection of facts. History is a foundation, a compass, a loadstone which points the way. History is also a repository of ideas and secrets, of philosophies and remedies, and perhaps something infinite.

Are there patterns in history? Are there ideas and secrets passed down from our ancestors and through evolution?  This book is divided into three sections. The first section, entitled “History,” surveys different historical eras in succession and proposes the premise that something, some secret, was passed down through generations. This secret, while never actually divulged (mainly because it is beyond ordinary understanding, including that of the poet) has something to do with the notion of infinity.

We are finite beings that can somehow imagine the infinite, but usually do not. Perhaps it is because the finite is comfortable. Yet some brave ones however try to pierce infinity. These pilgrims, these holy explorers, are beings that can finally begin to explore this, as of yet, unintelligible secret that has developed over the course of centuries. As such, the second section of the work is appropriately titled “Explorations of Infinity.” The last section ‘Return”charts the pilgrim’s return. 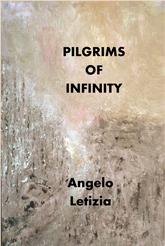