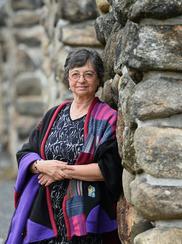 Eve Rifkah calls these her orphan poems, each one born in its separateness into this world to find its own way, as poems do, seemingly parentless, working their way like wind, like water. It’s a good metaphor for poems and a good way to read each poem herein, as if each one is speaking to us in the way that orphans do, from a distance, from a void in which everything in the known world can be seen as new. Read these singular poems that way, as if they are children wandering toward you on a road or river with no beginning and no end. Each one will ask of you. Each one will tell you the truth. ~ John Hodgen, Winner of the AWP Prize in Poetry;  Author of Heaven & Earth Holding Company, Grace, The Lord of Everywhere

Lost in Sight is a masterful weaving of the concept of what is lost, what never was. If you see the poems on the page, you’ll see that the words, the lines, even the tender or crushing ideas, are broken with gaps like the poems themselves have irregular heartbeats.  Rifkah’s canvas stretches from Li Po to Dorothea Lange’s photograph Migrant Mother in which she draws a parallel to “Rachel’s lost children/ captured in pictures/ a moment stilled.” Beware though, she suggests, being lost “In the Museum of Desire.”   ‘…when you want to add heat to the fire/come here for ideas/ if you get lost there is no one to blame/ we promise nothing.’ The most powerful to me is “Prevailing Wind” inspired by Olivier Messiaen’s The Quartet for the End of Time. Always there is movement in the poems, through seasons, among trees, through history. Rifkah imagines Neruda in “In the Photo Pablo Neruda Holds a Large Shell.”  ‘he thought he was lost/now he has the sea/ in his hands.’ And it is whorling. ~Terry Farish, Author of The Good Braider; The Beginning or the End of the World; The Cat Who Loved Potato Soup.


Lost in Sight by Eve Rifkah transports the reader within an internal landscape beating its wings in the heart of the natural world. The speaker begins as “a stranger / even to herself” as she navigates the way. “In the pathways”, a poem incorporating the title as first line, continues” of fallen stones and tangled briar / there is a way to open up from hiding” and throughout the poems, the speaker emerges through birdsong, fairytale, memory and story.  Rifkah often combines words that need combining. in “This Noise” “whatyouwishfor” is one; “sunsparkle”, sunwarmth”, and “rootbone” are others (“Destination”). She also uses spaces between and around words as a kind of punctuation by air. Will she know herself, “….tie the ends of her life together / on the sharp shafts of her needles…” (“Spindle”), or “….enter like smoke / like a figment / sleepwalk death / write poems in the air…”~Susan Roney-O’Brien,  Author of Legacy of the Last World, Bone Circle, Thira