When I moved permanently to a small Caribbean island, there was a saying within the long-term expat community: Why would we want to change what brought us here in the first place? Unfortunately, those outsiders who arrived during the decades following me didn’t get this same memo. So I approached Bill Engleson’s new collection of essays with complete understanding and empathy.

Confessions of an Inadvertently Gentrifying Soul is writing with a glint in its eye and an upwards curve to the lips. Yes, these are rants about the inevitable changes that come to any small place once it’s discovered, but through these rants Engleson manages to also preserve the memory of that which brought him to Denman Island in the first place. With this collection, we have a unique opportunity to see what life was like before those other gentrifying souls moved into Ruraltania and changed it into something that closer resembled their way of life they left behind back in the big cities.

Peppered with relevant quotes from famous authors, comedians, and other thinkers, these essays (both previously published and new) on island and small-town life, cover subjects as diverse as: libraries, librarians and unusual objects found inside borrowed books; the usefulness (or not) of committees; censorship; tradition; the generation of ideas; local characters and curmudgeons; movies and old episodes of Leave It To Beaver.

So even though you have never lived on an island or in a small place, there’s still a great deal of insight into life in general to be gained from reading Confessions of an Inadvertently Gentrifying Soul. Engleson’s writing is comfortable, and very much like chatting over coffee while sitting in mismatched upholstered chairs in front of a wood fire. In fact, the entire book is like reminiscing with an old friend.

ABOUT THE REVIEWER: ~ Susan M. Toy, author of the Bequia Perspective novels.  She has been a bookseller, an award-winning publishing sales representative, a literacy teacher, and a promoter of fellow authors and their books through her company, Alberta Books Canada. She is also an author and publisher, under imprints, IslandCatEditions and IslandShorts.

Confessions of an Inadvertently Gentrifying Soul is a collection of short essays, a primer of sorts, for anyone interested in life in a small community, or on a small island, in Engleson’s case. His seemingly casual observations of life in general, and country life in particular, are anything but.

With keen wit, Engleson drills down to the bedrock of country living, mining nuggets to guide the uninitiated. On small town committees, Engleson observes: “If someone spawns an idea to do one simple thing, the odds are a committee will be struck.” On parking, he shares this: “Promiscuous parking, we now know, can lead to STD’s. (Signs that deter.)”  Engleson’s self-deprecating style (“…Or perhaps no one was paying attention. I get that a lot.”) will have you laughing out loud. Even when he tackles more serious topics, like affordable housing, or tolerance and acceptance for LBGT citizens, he manages to unearth hidden satire.

Hilarity runs rampant throughout CIGS as Engleson pontificates on porta potties, turnips and tiny pants (read: shorts), the perils of volunteerism, country etiquette, small town secret societies and community discourse. And sprinkled generously throughout, are quotes that run the gamut from Brigitte Bardot to Voltaire. You’ll even see one from his alter ego, Rural Roberts.

The bite size essays in CIGS are perfect for ferry rides, night caps and workday commutes. And if relocating to a small town is something you’ve dreamed of, pack your shovel, because, to quote the man himself, “Caca occurs!”

ABOUT THE REVIEWER: J.P. McLean is the author of The Gift Legacy series. The first book in the series, Awakening, received honourable mention in the 2016 Whistler Independent Book Awards and her body of work is included in the Centennial Anthology of the Comox Valley Writers Society, Writers & Books – Comox Valley 1865-2015. 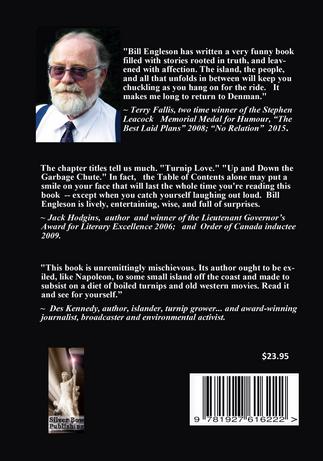 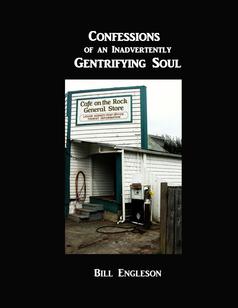 The chapter titles tell us much. "Turnip Love." "Up and Down the Garbage Chute." In fact, the Table of Contents alone may put a smile on your face that will last the whole time you're reading this book -- except when you catch yourself laughing out loud.  Bill Engleson is lively, entertaining, wise, and full of surprises. ~Jack Hodgins, - award-winning author Lieutenant Governor’s Award for Literary Excellence 2006; Order of Canada inductee 2009.

"Bill Engleson has written a very funny book filled with stories rooted in truth, and leavened with affection. The island, the people, and all that unfolds in between will keep you chuckling as you hang on for the ride. It makes me long to return to Denman." ~ Terry Fallis, two time winner of the Stephen Leacock Memorial Medal for Humour, “The Best Laid Plans” 2008; and “No Relation” 2015.

"This book is unremittingly mischievous. Its author ought to be exiled, like Napoleon, to some small island off the coast and made to subsist on a diet of boiled turnips and old western movies. Read it and see for yourself.”